Money that single, young, first-time house renters do not have lying in their bank accounts. Nestaway figured out that the security deposit was leverage that owners applied on tenants due to a trust deficit, and if an intermediary took responsibility, then there would be little reason for owners to demand this anymore.

This is what makes Nestaway an attractive option for tenants.

By creating a loop between these two sides – demand and supply, Nestaway started to become more and more entrenched.

“We aren’t in the house renting business. We are in the asset management business”, says Sahu.

Yes. He proceeds to explain.

The houses on Nestaway do work a bit like assets as the homeowners deposit their homes, after which, Nestaway finds tenants, either shared or family, and then, it collects a cut from the rent. The business is built on recurring payments of rent or annuity.

Sahu calls the annuity model “living as a service.” It hopes to build this into a sustainable business by offering more services to tenants and house owners, such as home insurance, deposit financing, baby care and transport, which, Sahu says, will make the business profitable. It seems outlandish, but the fundamentals appear to be there. Once a customer is locked into Nestaway, upselling seems like the most obvious next step.

“It’s a very large opportunity and the value of this opportunity is slowly being discovered [in metros—Bengaluru, Delhi or Mumbai],” says Karthik Prabhakar of Chiratae Ventures. “It’s a very fragmented space dependent on the local brokers. Somebody who can consolidate them and co-work and co-exist with the existing brokers is something which makes the platform scalable.”

But shouldn’t Oyo Living—Oyo’s entry into shared the shared living space—be a concern? Sahu says Oyo Living will only compete with half of Nestaway’s business: shared rentals. And as the remaining is family housing, Sahu is optimistic. “I am a bank of homes. I am not playing the trade game.” He says there are 50 million homes in the market, at any given point in time, and believes that the market is big enough for multiple players. 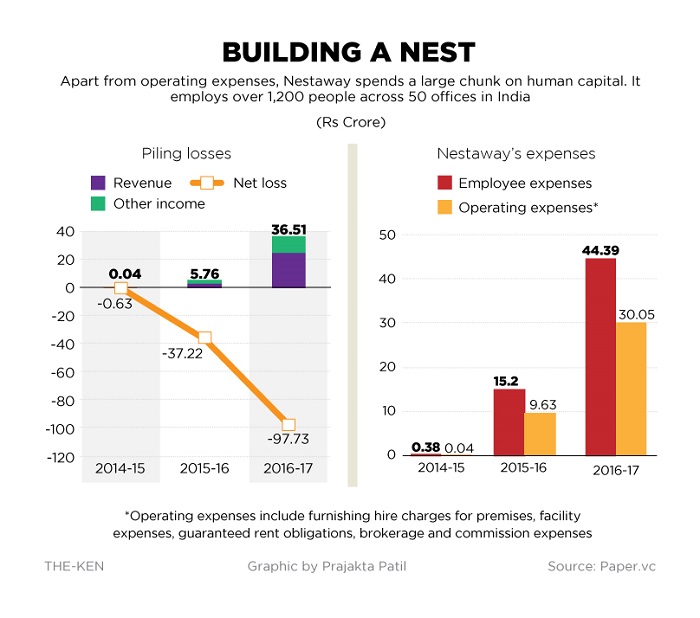 With its bags of cash, Oyo Living has entered Noida, Gurgaon, Bengaluru and Pune. While it currently has 2,000 beds across 35 properties, it has a very concentrated focus. It will take up standalone buildings by partnering with large real-estate construction companies and create shared living accommodation, mainly targeted at working professionals and students. It also plans to offer space for reading books, doing yoga and creating meditation zones.

Within a year, Oyo plans to expand to India’s top 10 metros with 50,000 beds for tenants. That’s half of Nestaway’s business that Oyo is looking at, but with the same number of tenants.

It’s not a winner-takes-all market, says Prabhakar. “As long as you can do it in a very economical and…sound commercial model, there’s space for 2-3 players here,” he adds.

There’s one important thing that Oyo can do with its bank balance, which may make it incredibly attractive to homeowners. Oyo can guarantee rent to them initially, says an industry official who didn’t want to be named. This is crucial. On the other hand, Nestaway says that it doesn’t do this, except in some unusual circumstances. Like when it wants to enter a particular locality, or if it’s interested in acquiring a homeowner who has multiple properties. And that, too, only initially, just to sweeten the pot. Sahu says that this is a small part of Nestaway’s business – around Rs 5.33 crore($0.7 million).

Could Oyo make Nestaway bleed by offering tenants and landlords a better deal? Sahu disagrees. A house being an emotional asset, the owner will wonder why someone is offering him more money, he says. This is counterintuitive. Will a landlord who is looking to rent out his home for a higher rent refuse it? The question is rhetorical.